back to PPSh Main Page 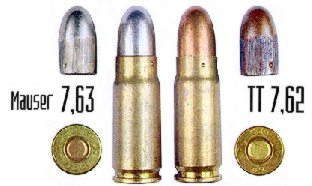 At the end of the 1920s, there was a need by the Red Army for a new type of pistol. The alternative between pistols and revolvers was already settled in favor of the pistol. Together with weapon types of diverse design (starting from original models of the designers Korovin, Prilutsky, Tokarev and foreign pistols Mauser, Walther and Steyr) domestic versions of ammunition were tested. The cartridge plant in city Podolsk, at this time, made a small amount of cartridges for the pistols Browning, Mauser, Steyr and some other models. After testing for a standard round, the Mauser cartridge, caliber 7,63 mm, was selected for use in a new pistol. Most likely, the purchase had important value for the weapons of the NKVD (People's Commissariat of Internal Affairs), who had plenty of 7,63-mm Mauser pistols. For standardization with the existing ammunition caliber, the cartridge was changed to 7,62-mm, though the tolerances of the cartridge case and bullet practically had not changed. As for the first cartridges being a copy of the 7,63-mm Mauser cartridge, the new 7,62-mm ammunition received a bullet of greater diameter, than the cartridge of the Nagant revolver, and more ductility of the case, thus permitting the increase of the force of ejection with automatic weapons. The bullet exterior - Increase of radius (ogival?) had also changed, making its nose cone longer, as contrasted to the prototype. With these changes, this ammo was adopted by the Red Army under the title - " 7,62-mm, cartridge for pistols, type 1930 ".

The difficulties which arose with the development of the pistol "TT", were mirrored in the quantity of ammunition issued for it. Prior to the beginning of the Great Patriotic War, the production of cartridges for TT was limited to a rather small amount. On the cartridge cases made in this period, head stamps are absent. The cartridges were produced only with a regular lead core bullet. The bullet jacket was usually steel, a tombac plating (an alloy of copper and zinc). A powder charge weight was selected using a calculation for obtaining, at 10 meters, a muzzle velocity of 420-450 mps. It gave a bullet energy of 2070 kg/sm2, at the same distance, equal to 60 kg/m, at a mean maximum pressure, which was not superior. The mean charge weight of P-45/1 smokeless powder (porous) depending on a consignment laid within the limits 0,48 - 0,52 grams. This was applied to equipment and the "VP" powder (Viscose, for Pistols), whose weight oscillated from 0,48 up to 0,6 grams. The grain of the powder P-45/1, was a dark green color in the form of a short, rather thick cylinder, whereas the grain "VP" represents a thin long cylinder of greenish color. This powder was used in cartridges made until 1946. The production of this ammunition was sharply increased in the 40s with the beginning of the mass issuing of SMG's.

In 1941, for SMG, the cartridge with the "P-41" bullet was introduced into the inventory. The cartridge with an armor-piercing + incendiary bullet and well-tried steel core - for defeating enemy personnel, for firing at petrol tanks, motorcycles, automobiles and airplanes.
The "P-41" bullet , with a weight 4,3 - 5,1 grams, had a black tip with a red band.

In 1943 a cartridge with tracer bullet "PT", with a weight of 5,2 - 5,5 grams was also produced. It gave a bright red line at distances up to 400 meters and was used for indicating targets in combat. The cupola of a bullet was green in color. The new plants, in addition, were attracted to production of cartridges with a regular bullet, since 1942, placed a head stamp of the manufacturer and year of issue on the cartridge case. And, since 1944, when the productivity of plants reached maximum, large plants, in addition to steel, put the month of manufacturing on the cartridge. Smaller plants put the quarter date of manufacture on the cartridge case. The increase in the issue of ammunition demanded plenty of scarce materials: brass for cartridge case and bimetal for manufacturing of shell cases. On the other hand, observance of specifications was not required of rigid long-term ammunition storage - they immediately went to the regular army. Such a situation allowed materials to be partially substituted. Four plants out of eight, releasing this category of ammunition, had run in production, cartridges with cheaper bimetallic cartridge cases, occasionally also steel cartridge cases without a coating. There were bullets with a steel jacket without a coating or plated by brass instead of tombac. Engaging new plants in the manufacturing of cartridges, before not releasing ammunition and usage of simplified military technologies lowered quality of production. Later, once after termination of the Great Patriotic War, the remaining ammunition issued up to 1946, was practically completely given away to troops for practice firing or were destroyed. In the post-war time, the production quotas of ammunition were sharply reduced, many plants starting peace production. Because of reduction of deliveries of a bimetal until 1949, the cartridge was produced only with a brass cartridge case. As of 1949, there was steel brass.....(?) (Word here is not clear. Derivative from brass. Probably means a jacket plated by a lamina of brass. That is Galvanotechnics?) cartridge cases, the production which was finished by 1952, with restoration of the issue bimetallic cartridge cases, soon completely superseded brass. At the same time, modifications were made in the design of a tracer bullet. On a carrying on part of a bullet there is a small bench, length is augmented by millimeter and a little weight increases.

The last modernization of the cartridge was in 1955, when instead of the old lead core bullet, a new one was adopted with the cheaper and solid steel core. For preservation of the former weight, the length of a bullet was increased up to 16,5 mm. Since 1951, the new bullet, step-by-step, replaced, at miscellaneous plants, production of the old bullet. Except for battle cartridges, cartridges of a secondary role were also produced. During the post-war years, blank cartridges appeared. Instead of a bullet, it had an elongated cartridge case, pressed into a "star". Dummy cartridges made prior to the beginning of the 50s, differed from battle ammo by two or three cross-sectional flutes on the cartridge case. Later, cross-sectional flutes were changed to four longitudinal. The corporations - developer of rifle weapon for the needs produced mock-up cartridges. From battle cartridges , minus the powder, left with the subsequent coating of the cartridge with nickel or cadmium.

Cartridge case with a charge and paper wad instead of a bullet was applied as a burster charge to the flame-thrower ROKS-2. A wad and bottom of the case for difference were covered with red lacquer.
The gradual replacement, at the end of the 1950s, of the TT pistols with the PM and APS pistols, and also SMG's by AK-47's, at first decreased, and then, in general, eliminated the necessity for production of the 7,62x25 cartridge. However, equipment for production was saved at plant 38 until 1989. In the 1970s and in the beginning of the 1980s, special lots of cartridges were produced, on orders of the Army, for export and for certain organizations.

For the Army, basically the reference cartridges with a bullet with the steel core for matching with the characteristics of an ammunition, long time stored in warehouses, and definition of their suitability to further storage were released. For difference the cupola of a bullet of such cartridge was colored in white color. In 1985, the last consignment of tracer cartridges with tracer, probably, were exported. From 1965 till 1973 and 1982 - 1986, by the order of film studios, plant #38 made a significant amount of blank cartridges of miscellaneous designs. Except for the standard version, with a brass case length of 34 mm, was produced, and the so-called "universal" cartridge, with a bimetallic case length of 29 mm. This blank cartridge was used to fire from weapons using the 7,62 TT cartridge , and 9-mm "Parabellum" and 9-mm "Makarov". It is curious, that the experts from a film studio "MosFilm" urged work on blank cartridge of almost all types of manual weapons, down to the Colt M1911 pistol, .45 caliber, and Garand M1, .30 caliber.

The history of this cartridge is far from completion. Probably, it will become the basis for creation of modern types of rifles. Confirmation to that is mention of the 7,62x25-mm cartridge in the program for creation of a prospective pistol for the Russian Army. The interest in the 7,62x25-mm cartridge is exhibited by the Ministry of Internal Affairs. Reasons to this are twofold. On the one hand, the widespread occurrence of means of individual protection considerably has lowered efficiency 9-mm of the cartridge PM. On the other hand, in Army warehouses, there are huge reserves of 7.62-mm cartridges. Last fact is especially significant for modern economic considerations. 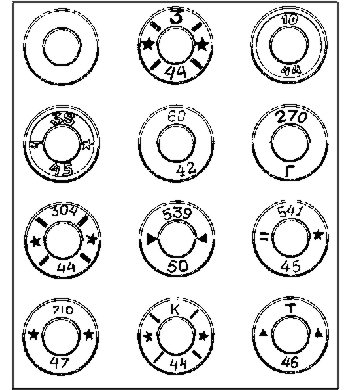